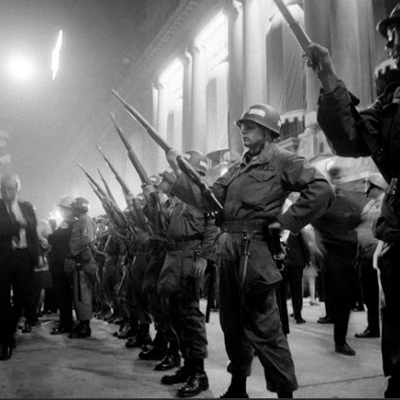 The Speech by Mayor Daley: On the violence between protesters and the Chicago Police at the 1968 Democratic National Convention. The Mayor had a Freudian slip when he said the Policeman was there to “PRESERVE” disorder. The Mayor gave orders to shoot to kill, and the police department was granted a union after their compliance with the Mayor’s wishes.

Ira relates the original Hyde Park in London to Chicago’s Hyde Park and how in London there is a soap box tradition where people can get up on an actual soap box and pontificate freely about any subject that strikes their fancy. They draw crowds of listeners while they exercise their free speech. They do this within view of the Tower of London where mass executions used to be carried out on dissidents and rabble rousers. The term falling off the wagon comes from the doomed getting drunk to meet their executioner and falling off the wagon on the way to the gallows. Ira broadcasting from Chicago’s Hyde Park, gets on his soap box about the sentiment to remove Mayor Rahm Emmanuel from office in the wake of his part in the cover-up scandal behind the rampant misconduct of the CPD.