Hans Solo has a skeleton in his closet!

Star Wars News.
Hans Solo has a skeleton in his closet that has been revealed in Star Wars Number 6, the latest issue of Marvel’s Star 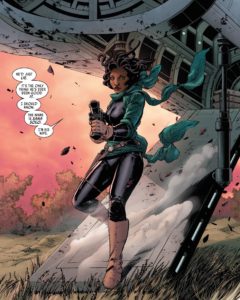 Wars Comics. Only this skeleton is covered in flesh and curves, so if you haven’t been to your local comic collector shop and plunked down coin for the latest issue, let me spoil the surprise for you. You could opt not to read any further, but I doubt you can resist now, so here’s the beans…Hans Solo has a wife. Don’t know if he has kids to boot but he does have a wife pictured below.

Disney and Lucasfilm are treating the story events and characters in the comics as canon, so that what happens in the comics doesn’t stay in the comics. The film franchise will synch to what goes on in the comics. This likely means that Hans Solo had a wife while he was wooing Princess Leia in the original film almost 40 years ago. Hans is a raffish rogue, so what’s surprising about his womanizing and omission of a little fact that he has a wife?
It will be interesting to see if Sana Solo pops up in the film version of Star Wars in the near future.